How to become a wildlife cameraperson

This highly glamorised job offers incredible opportunities to travel the world and document the marvels of natural world and wild places. It is however, a highly challenging and demanding job that is often not quite as glamorous as is made out. However, for adventurers and explorers who want to embrace the ups and downs of this career and want to become a wildlife cameraperson, I humbly offer some guidance

What is the job? – the good and the bad

The initial consideration is that it is only one of many jobs within the wildlife filmmaking industry. More importantly, the wildlife cameraperson only works during one section of producing a wildlife documentary (thereby only having earning potential during that phase).

A wildlife documentary production involves (a) pre-production, (b) production and (c) post production. Now, strictly speaking the role of the camera operator is limited to the production phase of project. This is the phase where the crew travel to a (usually) exotic location and collect the media content for a wildlife documentary. During the planning phase, a camera operator may be asked to supply stock footage for the pitch or be asked advice on where and when to capture content; but has no formal revenue earning role in this part of the production. Similarly when the producers, editors, sound engineers, narrators and director are pouring over the footage during post production, the camera operator has no definitive revenue earning role.

In my opinion it is vital a specialist camera operator should accept that their revenue earning potential is directly related to the number of days away from home they are willing to sacrifice. Whilst this is wonderful for single, young students, when you have a family and children, this can put many additional pressures on you. As a result many camera operators  ‘moonlight’  in the corporate and commercial fields. This enables them to work around their family commitments and the desire to be at home more often. Alternatively, they develop diverse skills that allow them to contribute to the pre-production and post-production phases of a documentary (e.g. researcher, director, editor, producer etc.). With this in mind, here is an outline of the ‘good the bad, and the ugly’ (with apologies to Sergio Leone) of a wildlife camera operator’s job.

The Good – The wildlife cameraperson’s job is to collect the media content on a documentary using one or more cameras. This means they are constantly near the action and using the various functions of the camera to collect sharp, stable, focused video images of the entire show. This further means that the camera operator will travel to where the action is, and will be the highest priority crew member (in addition to the talent) to view and observe the wildlife during shooting.

I’m out filming today and I have some time before the next interview starts. So I thought I’d write a little two-part tip for people who are new to filmmaking. This tip is about working as a camera operator when you have a client, director or journalist acting as the interviewer.

The first photo above is today’s setup. This is what the interviewee sees when they’re being filmed (minus the interviewer of course). It feels scary having that kit pointing at you. So the first part of my tip is – I try to keep the amount of kit I use to a minimum so as not to be too intimidating.  For example, if one light is enough for a good shot, I won’t set up three more to get a slightly better shot and terrify the interviewee.

The second part of the tip, is that one of the most intimidating things pointing at the interviewee can be.. well… me – the camera operator :D. So to help with this, ahead of filming I always chat with the interviewer to see how much experience they have with interviewing for camera. If they’re new to it, I give them a few tips about interviewing and explain that I feel my job for the day is to help people feel as relaxed as possible, and keep things running smoothly. I’m not there as a second interviewer or director, stepping on toes and confusing the interviewee about who to talk to.

Later, when the interviewee arrives, I introduce myself in a friendly way, but also make it clear that the interviewer is in charge of the filming – it’s their room and they know what they’re doing. They are the person who is going to look after the interviewee and get them through the shoot – and hopefully even help them enjoy 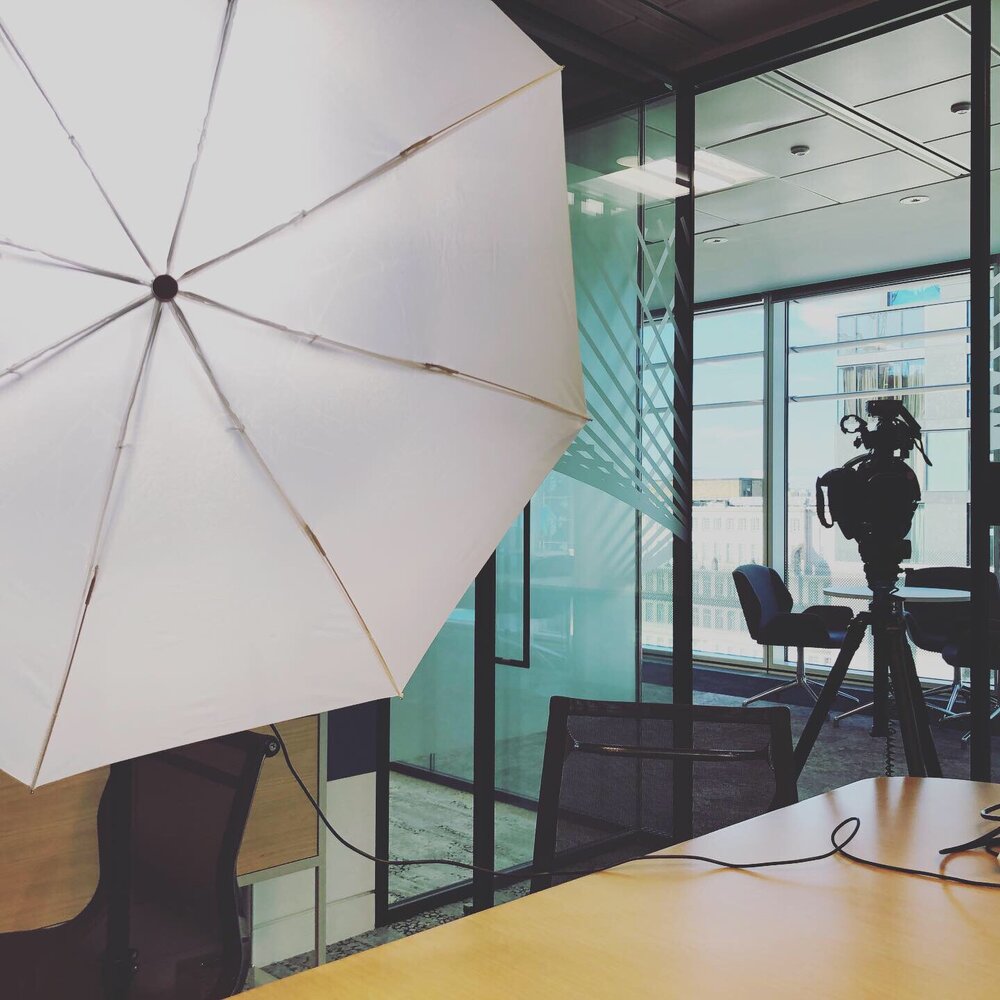 Television is a visual medium created by many, but we so often give the majority of credit to the people on the screen, namely the reporters, on-air talent and analysts, without truly appreciating the storytellers holding the camera.

Let’s get the lingo straight first

No one in the industry calls anyone a camera operator. It’s too long and by nature television people talk fast and react even faster.

How to use Shooter in a sentence:

Reporter: “I’m headed to Town Hall and I need a shooter in the van with me in 5 minutes!” Screaming for a Shooter does not mean they want someone to pack heat for the drive; that would be bad. Nope, their request is for a camera operator to get their gear ready and get in the van.

How to use Photog in a sentence:

Assignment desk editor trying to organize the stories for the day: “I’ve only got two photogs on today and I have three major stories happening at the same time!” (Yes, this sort of panic is also common, whenever you have two photogs three stories break in different parts of town.)

You may think that all camera operator are created the same but that is not the case. There are different specialties. Let’s start with the most entry level of positions that hold or operate a TV camera: studio camera operator. 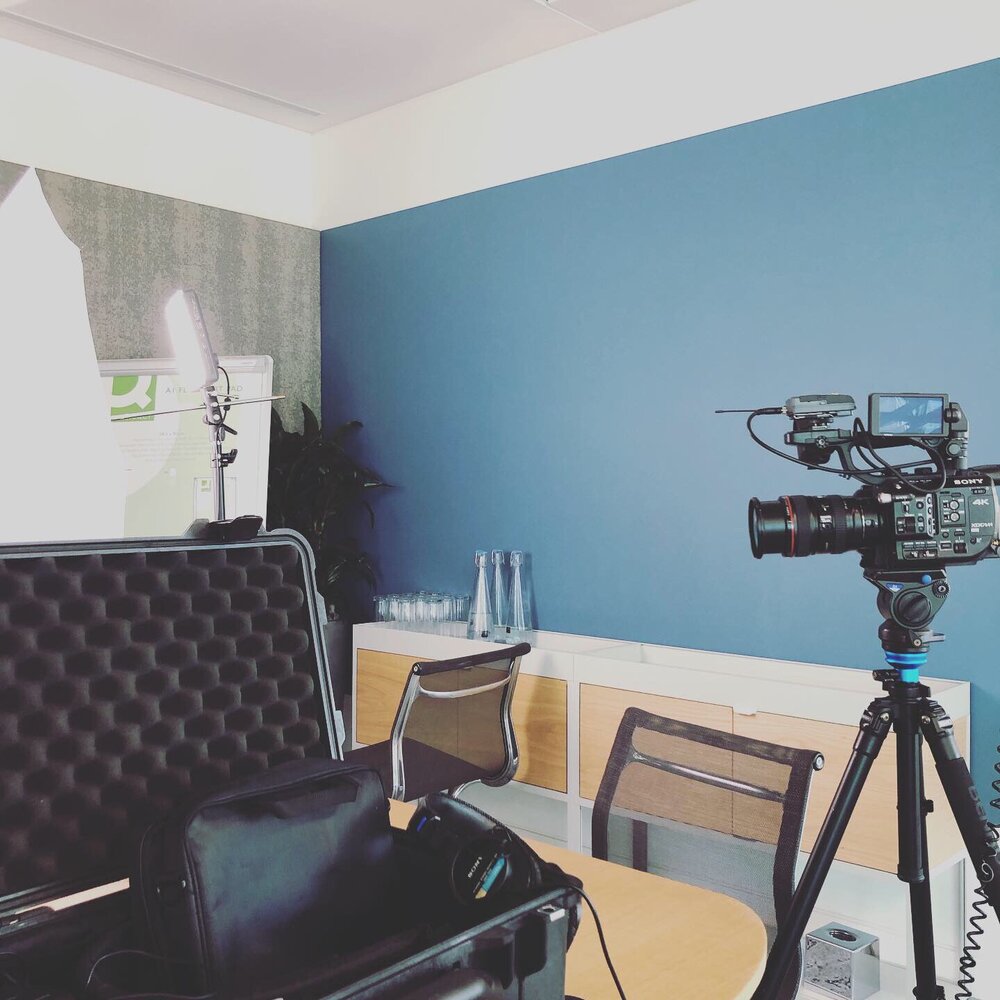 Solid Camera Operators are paramount when it comes to capturing an event. Even if the set and event look spectacular, you still need a skilled camera operator, with steady camera operation, to really catch the beauty

Live multi-camera shoots are are a fun and exciting way to live stream or broadcast your event to a much larger audience. Simply cutting between camera angles is an exciting and creative method of building engaging content on video. Most modern television audiences are used to seeing a different camera angle every 3 seconds.

3) A nice looking set. Remember, the video will only look as good as the backdrop and lighting, no matter how nice the video equipment is.

Nice equipment is fun, but you’ll want a Camera Operator who knows what they’re doing!

The technology behind multi-camera video production has improved a great deal over the last decade especially. regularly harnessing equipment that didn’t exist 5 years ago to launch a new video game to 4M viewers, or live stream a TEDx talk, or host a team building all-hands meeting to select employees and stakeholders.

Combined, the technology we have is perfect for a live sports broadcast, TED talk, news studio, and live gaming e-sports. Using crystal clear audio in com headsets, the entire production crew can collaborate on genlocked and synced signal sources, while show callers manage the show flow, technical directors are leading the charge in the crew, and you, the client, are basking in the glory of an excellent production 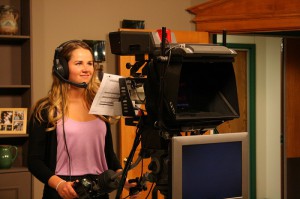 A Day In The Life: Behind The Scenes With TV Camera Operator

“If you had told me in college that I was going to be a cameraperson, I would have told you you were out of your mind,”

“It’s the first big bowl game for my crew, it’s exciting,” says. “I’m proud for our crew because we work really hard, and we try to nail everything.”

There are not a lot of women who do what I do at this level. There are runners, graphic operators and stage managers. But not many camera operators. One of my first jobs, I walked into the truck and one of the guys tosses me his keys. “Can you go move my car?” I said, “Sure. You might not get it back, but I’ll move it for you.” He’s like, “Are you the runner?” I said, “No, I’m a camera operator.” We are on the same crew this year.

I tell people we’re like movers. We arrive, unpack the truck, set everything up and then pack the truck up again and move on to the next city. Football is a busier day, and a longer day, than other sports.

get in about six hours before the game starts, but for the Sugar Bowl, I’m actually here a day before most people. That’s because I set up the broadcast booth on Wednesday. For this game, I have about 30 boxes, cases of gear, monitors and lights. A robotic camera that shoots back at the announcer that the director can control. It’s a whole set. They put me in an empty room and we build the announce booth from scratch.